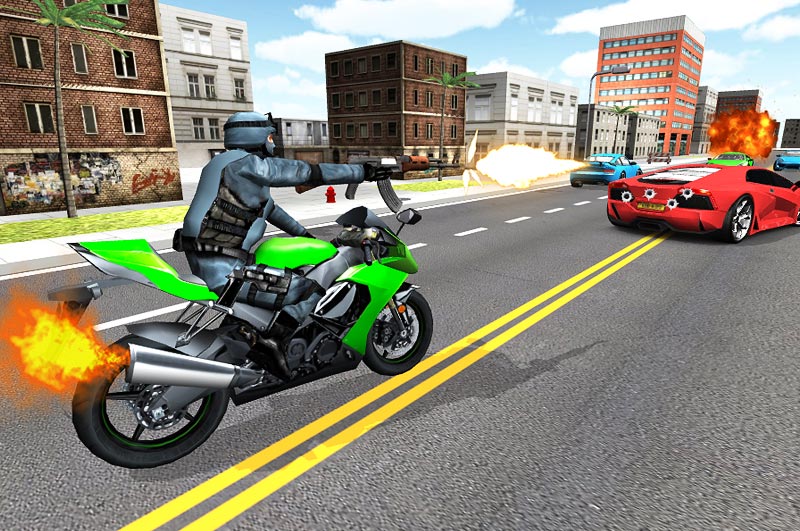 Android’s as a smartphone operating system is a prolific and creative platform that is advancing by leaps and bounds. Today, the platform has a plethora of applications that only increase its popularity amongst tech-savvy users. We only have to download them and experience their superiority over other smartphone applications. In fact, Android has become the new smartphone droid that is entertaining, productive and useful with no equal.

But what about the platform’s plethoric number of games? Although racing games, both cars and bikes, have been around for years now, the offerings of Android still remain competitive and unmatched in a number of ways. The superior features and excellent experience of racing games on Android keeps gamers glued to them like nothing else.

Have you ever imagines riding a super-cool motor bike and shooting enemies? Well, hold your horses because Moto Shooting 3D is the game that meets your criteria. The game is an excellent fusion between action and bike racing that thrills you to the core. You are likely to transform into a gritty racer from a lay gamer on the other side of the screen. Moto Shooter 3D opens with the selection of powerful weapons and robust motor bikes with attractive color schemes. But most of these weapons and bikes are locked till you complete different levels of the game. For that to happen, you need to be ready to face the challenges of the game.

Make a selection from the available guns and bikes and vroom…you are at the starting point, ready to race through bustling city roads shooting enemies. As you accelerate, the real challenge begins. You are now racing through the city landscape, shooting at targets that prominently appear in pink holograms. The targets are nothing but vehicles on the road that are highlighted in a different color. You can tap on the accelerator button on the right side and shooting button on the left to keep going ahead.

As you are racing, you need to dodge the traffic on the road. You will have to slip through narrow gaps between vehicles, dodge trucks and cars coming from the opposite side and keep your balance on the road. You need to be super agile and focused in order to prevent yourself from crashing. The fun isn’t over here. As you perfect your race, you earn money to switch to better bikes and weapons. Moto Shooting 3D is a notable departure from previous bike racing or shooting games as it fills your experience with more excitement and thrills.

Apart from being available for free on Google Playstore, Moto Shooting 3D has various interesting features. Some of the key features are as follows:

Moto Shooting 3D represents a realistic city landscape with fast-moving traffic. Navigating the city on a motor bike with a weapon in hand is simply exciting and thrilling. The game’s interface and graphics are excellent, as they give people an immersive experience. The user-friendly game controls, comprising an acceleration button on the right side and shooting button on the left, makes it easier for gamers to go through the race.

If you are someone who loves motor bike racing games but also fancy shooting games, then you should definitely try Moto Shooting 3D. The game is an exciting package of action and racing that will keep you glued to it till the very end. So what are you waiting for? Download the game, hop onto your bike, and become a racing champion like nobody else!