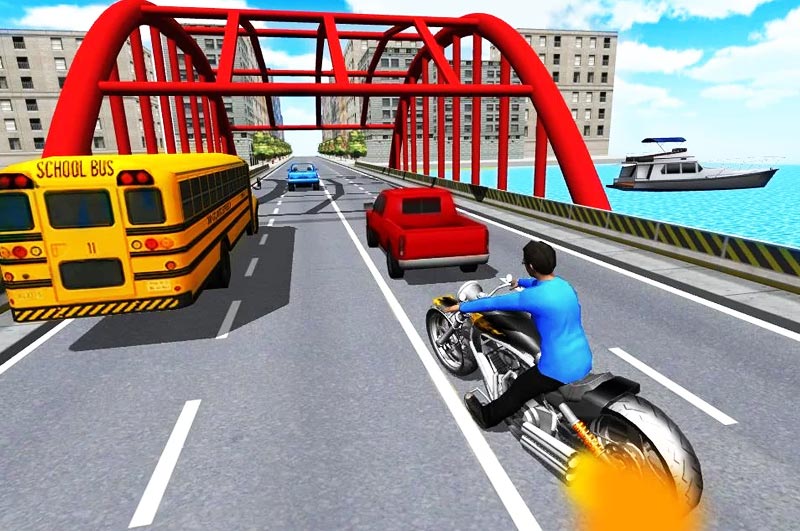 Racing games are not new in the industry. In fact, racing games for PCs have been prevalent for over two decades now. But as the smartphone culture is spreading wide, people have become more and more choosy about what they play and use on their phones. This is particularly true in the case of gamers who glue themselves to their phones, either racing or shooting enemies in their favorite games.

However, things have changed since Android came to the forefront as a smartphone robot. The platform has undergone tremendous changes in the recent past. The platform offers a wide range of applications and games that only set the bar higher for other players in the industry. Google’s Play Store has become an independent marketplace for downloading applications and games of almost every genre.

Enter Moto Racing 3D, a game that excites gritty and savvy gamers who love to speed on the road. The game is certainly more developed as compared to Motocross Madness or Roadrash, and blends superior graphics with superb gaming features into a robust racing package. If you are someone who loves to play motor racing games, Moto Racing 3D is something you cannot miss. Choose a beefy motor bike and hit play. Doing so starts your race through the busy city roads, highways and other tracks where you have to forget your human dexterity for some time, and slip into the skin of an agile racer. You can choose either double or single-way roads depending on your preference. Ride your bike through the bustling city road, dodging cars, trucks buses and police, and accelerate to the limits without fretting much.

But the fun isn’t over here. You get the privilege to earn points and expand your arsenal of bikes. The game will put to test your skill as a rider. You need laser-sharp focus to dodge objects on the road and make sharp maneuvers and turns as you navigate the city, all of which require precision and agility.

Don’t worry you are not the only racer on the road. You can compete with other players to improve your rank and earn more points. The wide selection of bikes and their color schemes prods gamers to plunge into the race. You have three gameplay modes to choose from: quick race, career, and new career. You can perform stunts, jump off the track or knock down your opponents to surge ahead in the race.

Playing a racing games has never been so realistic before Moto Racing 3D. You can unimaginably feel immersed in the game with the impeccable technology underlying the game. The graphics is an improvement over older versions, making the game more vivid and realistic. The distant mountains, the adjacent body of water, and the dust from your bike tires come together in a lucid, three-dimensional frame. The multiple camera angles allow you to view your stunts and maneuvers from different angles so that you can get a taste of your success as a racer.

Starting from Lakes Valley, the game takes you through amazing city roads and suburban highways. The game fills your experience with excitement and thrill when you dodge cars and trucks and zoom through the busy roads. The game is no less than an action flick where roaring, beefy bikes take no time to perform death-defying stunts on the road.

Download the full version on your Android smartphone today and become a racing champion!