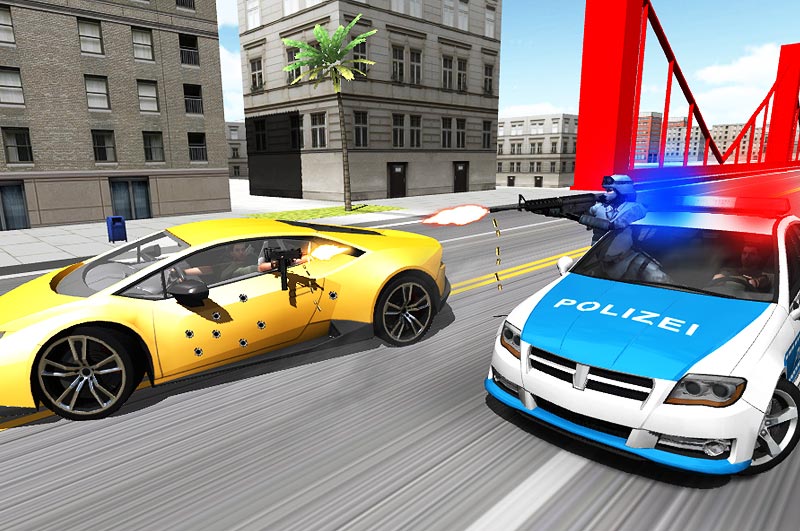 The mobile gaming platform has undergone a revolution in the recent times, with Android launching more and more games and applications on its game marketplace. If you have an Android phone today, you don’t have to worry about your boredom thanks to the innumerable applications being offered on the platform. Google Playstore has become the destination of several gadget freaks and game enthusiasts who love to experiment with the platform’s newly featured games and applications.

If we have to talk about Android’s gaming platform, we consider an extensive platform with a wide range of games. From action to racing genres, Android games appeals to users like no other platform. The immaculate features and user-friendly technology of Android garner the much-deserved appreciation and accolades, making the platform seem like a droid from a faraway galaxy.

The best part about games is that it allows you to play any role you want. Police Car Racer 3D is not like any racing game found on the extensive Google Playstore. You are now racing a police car in a realistic three-dimensional mode. The game, offered by Game Division, may sound like a normal game where you have chase and kill enemies, but the gaming experience is a far cry from older versions of the same type. Police Car Racer 3D lets you become a racer with skills par excellence. You get into your car, punch the accelerator, and boom! You are on the race track, chasing and destroying enemies like a noble, law-abiding policeman. But that’s not all about the game. You also get the privilege to earn points, buy faster police racing cars, and develop an arsenal of better weapons.

You can choose from a variety of police cars and even customize them to make them more intimidating and beefy. Also most weapons unlock when you have enough points to buy them, but you can be sure about the hugeness of the arms cache. Racing your police car through the traffic of the city cannot be more thrilling and exciting. The game also allows you to navigate different city roads that make the game look like something out of an action flick.

Police Car Racer 3D is will surely put your driving skills to test. You need to make sharp maneuvers and turns that require agility and precision. As you race through the traffic, you need to cut through narrow spaces between vehicles and target enemies to shoot them. The game is not about a loyal policeman chasing enemies. Rather you play a policeman behind the wheels who doesn’t mind breaking a few rules to meet his target.

Well, you must have savvied the features of the game to some extent. However, the key features that make this game special are as follows:

Police Car Racer 3D gives you the most realistic gaming experience as it incorporates features of real-life objects. The 3D graphics is an icing on the cake and intensifies the overall gaming experience. A police car racing game that fuses action with tact is common, but a game as realistic as Police Car Racer 3D is certainly a fresh gust of wind for Android-savvy gamers.