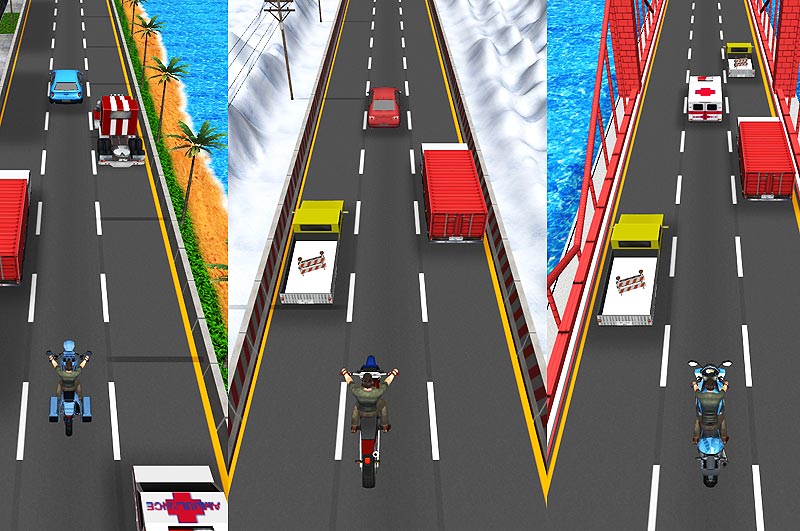 Racing games never seem to lose their charm. They have been about for a while now. But should we expect a revolution in this front with the profusion of Android phones in the recent times? Well, yes we do. In fact, the racing games found on the Android platform have undergone a huge revolution in the recent times. They are no longer games where the player presses a key on the keyboard to accelerate the bike to the finish line. Nowadays, bike racing games come with superb technology and features that gamers cannot refrain from playing.

Android has emerged as a smartphone droid that constantly upgrades itself to incorporate new features, applications and games. Such upgradation has brought several new games to users, making them laud the platform over other smartphone operating systems. After all who doesn’t want something new on their fingertips?

Moto racer is perhaps the first name that pops in the mind of gamers who have a special interest in motor bikes. Avid lovers of motor bike racing games are aware of Moto Racer’s arcade style racing featuring both street and dirt bikes. The game traversed the PC domain and now entered the smartphone realm with extra features and beefed-up technology.

If you love speed, then Moto Racer is the game meant to tease your speedy instincts. The game blends blistering racing speed with tactical maneuvers like no other game from the past. The racing superbikes and tactical curves have raised the game to a new level. The game has amazing features like two riding modes (simulation and arcade), lifelike graphics and a wide selection of motor bikes to race.

After you enter your name and game mode, you have a plethora of motor bikes with attractive color schemes to choose from. Select any bike and vroom…you are ready at the starting point. A simple tap on the keyboard unleashes you for racing through the busy city roads and suburban highways. You slip into the skin of an agile and focused racer who doesn’t mind breaking a few rules to reach the finish line.

The racing experience is fun and exciting like no other racing games. Your agility and precision comes to play when you are dodging cars, trucks, buses, and also the police to cut through the bustling city roads. You may even have to slip through narrow gaps between vehicles and avoid falling. The game puts your skills as a rider to test, and ensures that you completely immerse yourself in the race. The fun isn’t over here. As you race through the city roads, you need to collect coins, which can be used to buy better and more robust motorbikes. It takes time for first-time players, but the game is yours once you perfect your maneuvers and turns.

The latest version of Moto Racer is a noteworthy improvement over older versions of the game. The game is packed with features that provides the most memorable motor racing experience. However, the key features of Moto Racer are as follows:

Moto Racer’s superior graphics makes the racing experience more vivid and realistic. The game features different landscapes such as snowy or rugged tracks, bridges, and city roads that add to the game’s realism. The light and sound features of the game are impeccable, and the game controls are extremely gamer-friendly. Moto Racer’s amazing gameplay never fails to excite Android-savvy gamers and sets the bar high for all racing games in the realm.