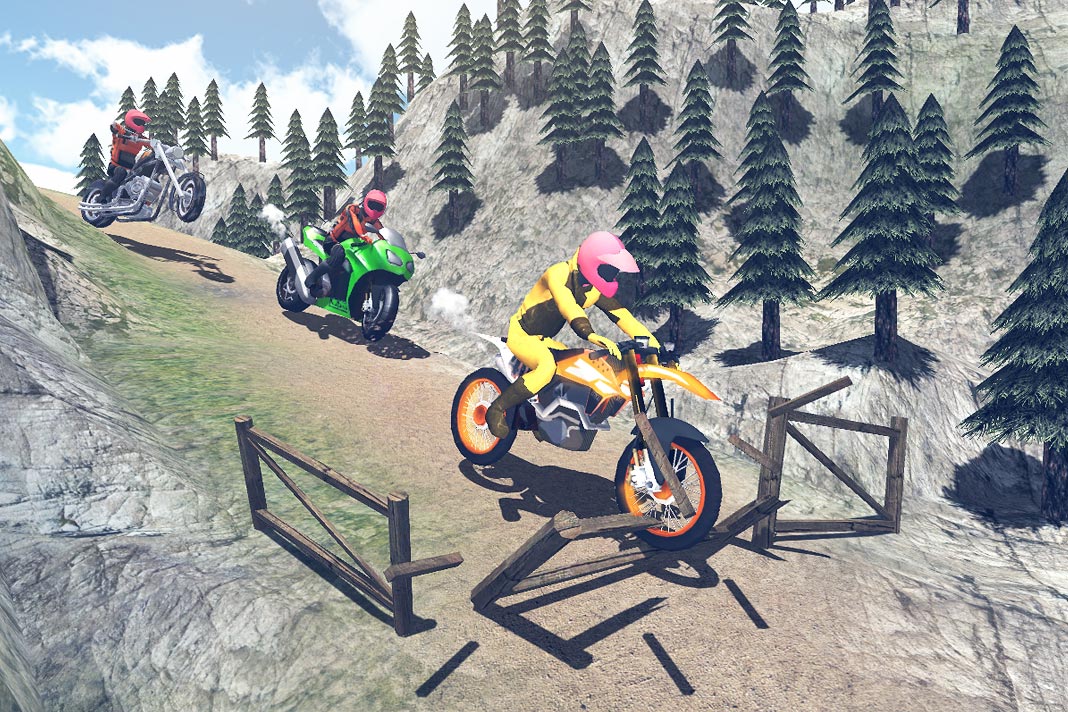 Smartphones have become the next big thing for gamers. As Android is slowly transitioning towards becoming a full-fledged smartphone robot, the applications and games on the platform are becoming more and more advanced and sophisticated. The advancement is prominently seen in the games offered on the platform. Today’s Android games are developed with superior technology and excellent features that appeal to gamers more than any other platform’s offerings.

Racing games are certainly not new and many of our older readers will have fond memories of playing Outrun back in the 80s. Whether cars or bikes, racing games are full of excitement and fun. Each game has something different to offer. But Android’s Moto Racer Dirt 3D has taken bike racing games to a whole new level with its thrilling experience and death-defying stunts. Let’s look at this game which is a noteworthy improvement over its previous versions.

If you are a gamer who loves speed, then Moto Racer Dirt 3D is the right bike racing game for you. Set in the high mountains, the game allows you to ride through the rugged terrains and perform thrilling stunts with a sports bike. Although it may seem similar to Motocross Madness, the game is a huge departure from the lesser-developed versions of bike racing games that confined movements of the player big time. With Moto Racer Dirt 3D, you experience bike racing in the thrilling and rugged mountain ranges. There are 8 levels in the game, but they unlock only when you win the preceding level. However, the first level opens with a roaring bike, revving to zoom through the mountains. Like any great game, it’s extremely easy to get started, but hard to master. The red pointer directs you towards the finish line. But the real challenge lies in speeding through the rugged terrain without falling off the edges. The game is over as soon as you crash your bike against something.

The race is not that simple. There will be obstacles on the track that test your stability. In fact, the game puts your riding skills to test by increasing the difficulty of the terrain with each level. You need to make sharp maneuvers and turns in order to remain on track. But the game also allows you to go off-road, unlike similar other bike racing games.

The best is yet to come. As you succeed in each level, you get rewards, which can buy you a more robust bike. So you can expect to improve your racing skills each time you win rewards and buy a new bike. Although the graphics look a little plastic, the game’s setting never fails to excite you. Overcoming logjams and cutting through narrow ridges are hazardous, but exciting. The game lets you slip into the skin of a stuntman on a bike who knows no speed limits.

Perhaps the locked bikes and levels is a tactic adopted by developers to keep gamers engrossed in the game. After all, who doesn’t want to perfect one’s riding skills and get a better bike in return? On earning rewards, a huge collection of sports bikes opens for you. You can choose the ones that will rank you as a champion of the game. Controlling the bike is has become a lot easier with both screen tap and screen movement mechanisms. Moto Racer Dirt 3D is the perfect game for speed-loving, Android-savvy gamers who like to race on unconventional tracks and experience thrill and excitement in a realistic manner.