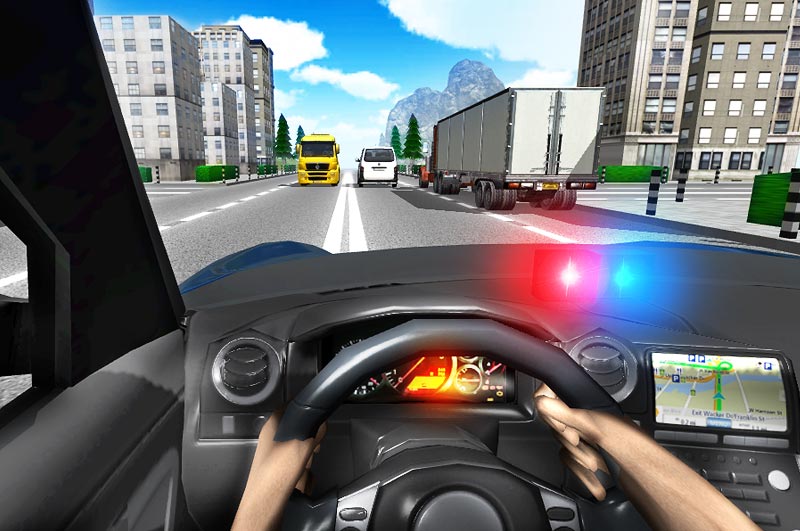 Racing games have been in the gaming realm for years now. But the ones available on Android smartphones are a big departure from the previous versions. Google Playstore is the marketplace where users find Android’s wide-ranging games and applications that showcase the platform’s superiority over other operating systems. The racing games available on Android today come with excellent features that keep gamers glued to their smartphones throughout the day.

If you are someone who fancies such games, you certainly cannot afford to miss a few of the platform’s offerings. From action to racing genres, Android is the ultimate destination for gamers. With realistic physics and superior features, Android games tantalize your gaming instincts in the best possible manner.

Enter Police Driving in Car, a game that turns you into a law-breaking racer behind the wheels of a police car. Once in the car, you are no longer a gamer on the other side of the screen. You become a gritty, anarchic policeman chasing enemies on a busy city road. That’s the transformative power of Police Driving in a Car game.

The game opens with a wide selection of police cars. However, most of these amazing police vehicles are locked till you clear levels. Once you choose a vehicle from the available ones, you are set on the starting point of the race. Tap on the accelerator button on the right side of the screen to propel your police car ahead. However, the challenge begins hereafter. As you accelerate and race ahead on the city road, you are met by the bustling city traffic. The thrill and excitement lie in the way you dodge trucks, buses and cars on the road and chase your enemy. To give you the feeling of being a real policeman, a helicopter hovers over your police car as if guiding you towards your target.

The cockpit view of the game gives you the real thrills while dodging the traffic. Your driving skills are put to test, as you have to slip through narrow gaps between vehicles and make precise maneuvers to avoid crashing. The screaming sirens of the car makes you feel as if you are driving a real police car.

The game looks no different from a scene stolen from an action flick. You are accelerating and cutting through the bustling city road behind an enemy. The fun part of the race is the opportunity to earn points, which can buy you a more robust and powerful police car. As a better car unlocks for you, the race becomes even more exciting. You can perform stunts and drifts, crash into other cars, jump off large ramps and scale concrete structures. You become a reckless police man who knows no speed limit and rules while chasing an enemy.

The excitement and thrill involved in the game is unmatched, especially when you are driving a police car. However, there are few other features that are an icing on the cake:

If you are someone who fancies police car racing and drifting games, Police Driving in Car is the game for you. The realistic driving experience of the game will completely immerse you till the very end. The game controls are extremely user-friendly as they use both tilt and touch features. So what are you waiting for? Download this game and become a gritty policeman who doesn’t mind breaking a few rules when it comes to car racing.